It's Here! Announcing Appwrite 0.10 and the new Realtime API!

After long anticipation and great feedback we got from the Appwrite community during our alpha launch, we're thrilled to announce the official release of Appwrite 0.10, including one of our most anticipated features: the Appwrite Realtime API! 🥁

Besides the Realtime API, Appwrite 0.10 also comes with some exciting features, including new APIs, improved performance for the Appwrite Cloud Functions API, and multiple bug fixes.

🤔 What is the Appwrite Realtime API?

Appwrite's new Realtime API introduces a new entry point to your Appwrite server in addition to the existing Appwrite REST API, and allows you to subscribe to any real-time events you'd like across your Appwrite projects.

The Realtime API brings a powerful websocket server to your apps to supercharge the Database API and more! You'll be able to listen to real-time events for any of your Appwrite services including users, storage, functions and more. That way, you get notified about a new file being created, a user creating a new session, or a function execution being completed.

In addition, the new Appwrite client SDKs include new supporting methods to allow you to subscribe to any events and trigger any callbacks you wish directly from your Web, Flutter, or Android application (native iOS coming soon 😉).

The new Realtime server has the potential to support hundreds of thousands of concurrent connections on a single server with millions of open subscriptions. This is a great start, and we're constantly working to improve these numbers and push Appwrite's performance 🚀 to the limits!

The Realtime API leverages the same easy Appwrite permissions mechanism to ensure only users with ‘read’ access to your different resources would get notified once a relevant event has triggered.

As with all our existing SDKs, the new subscribe methods of the Realtime API follow the trusty and predictable Appwrite coding style! Here's a sneak peak of the new API signatures 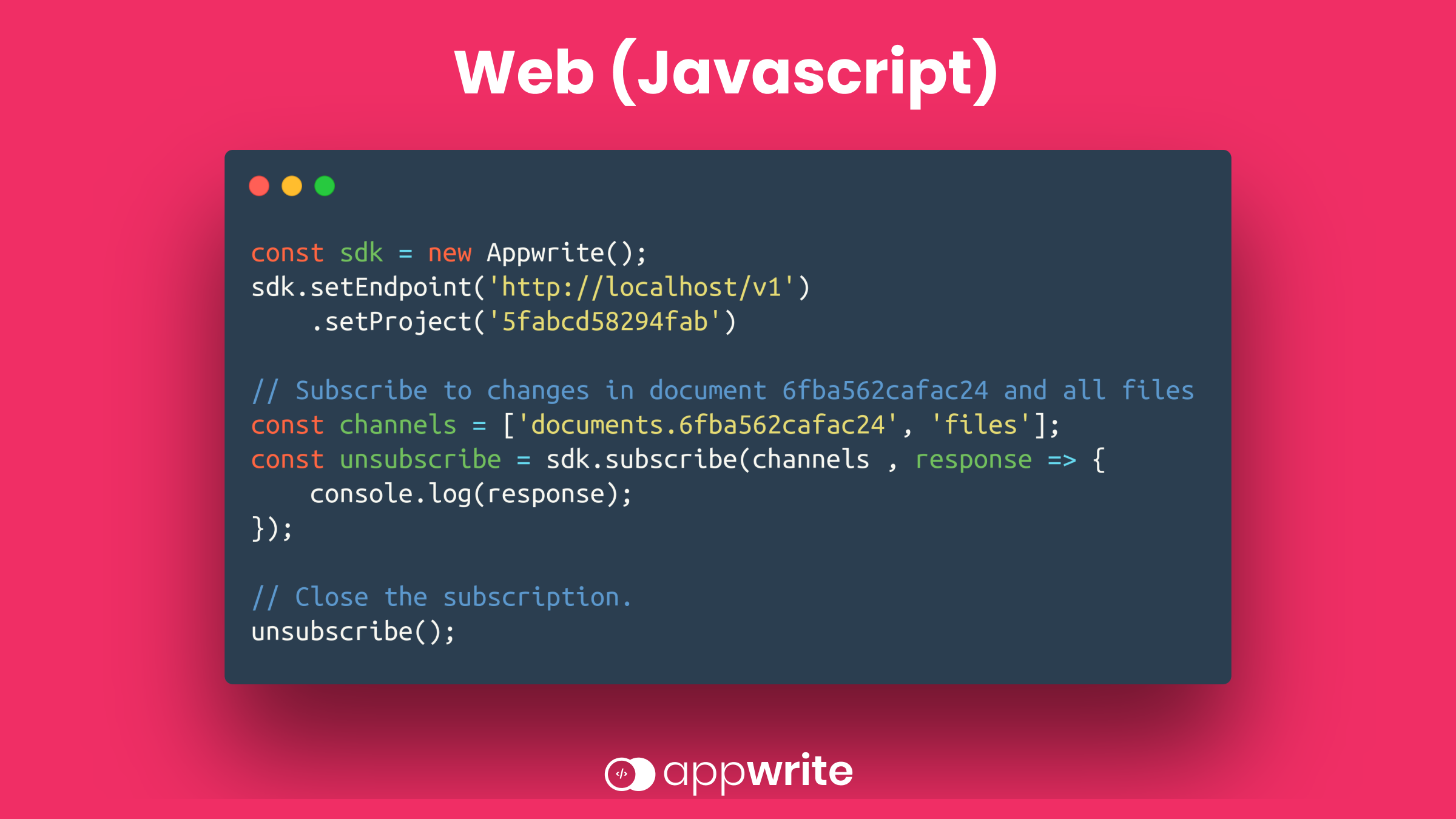 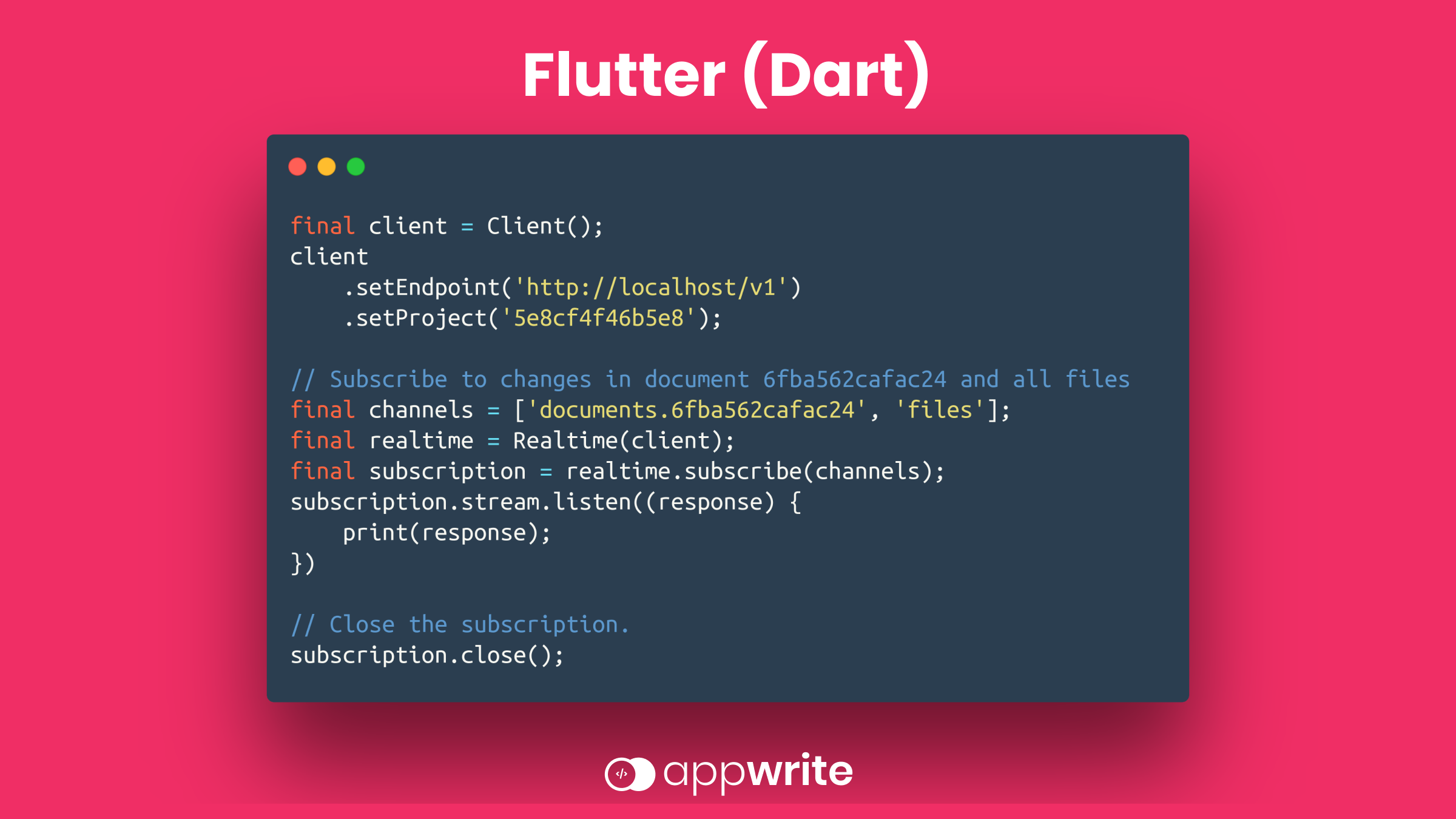 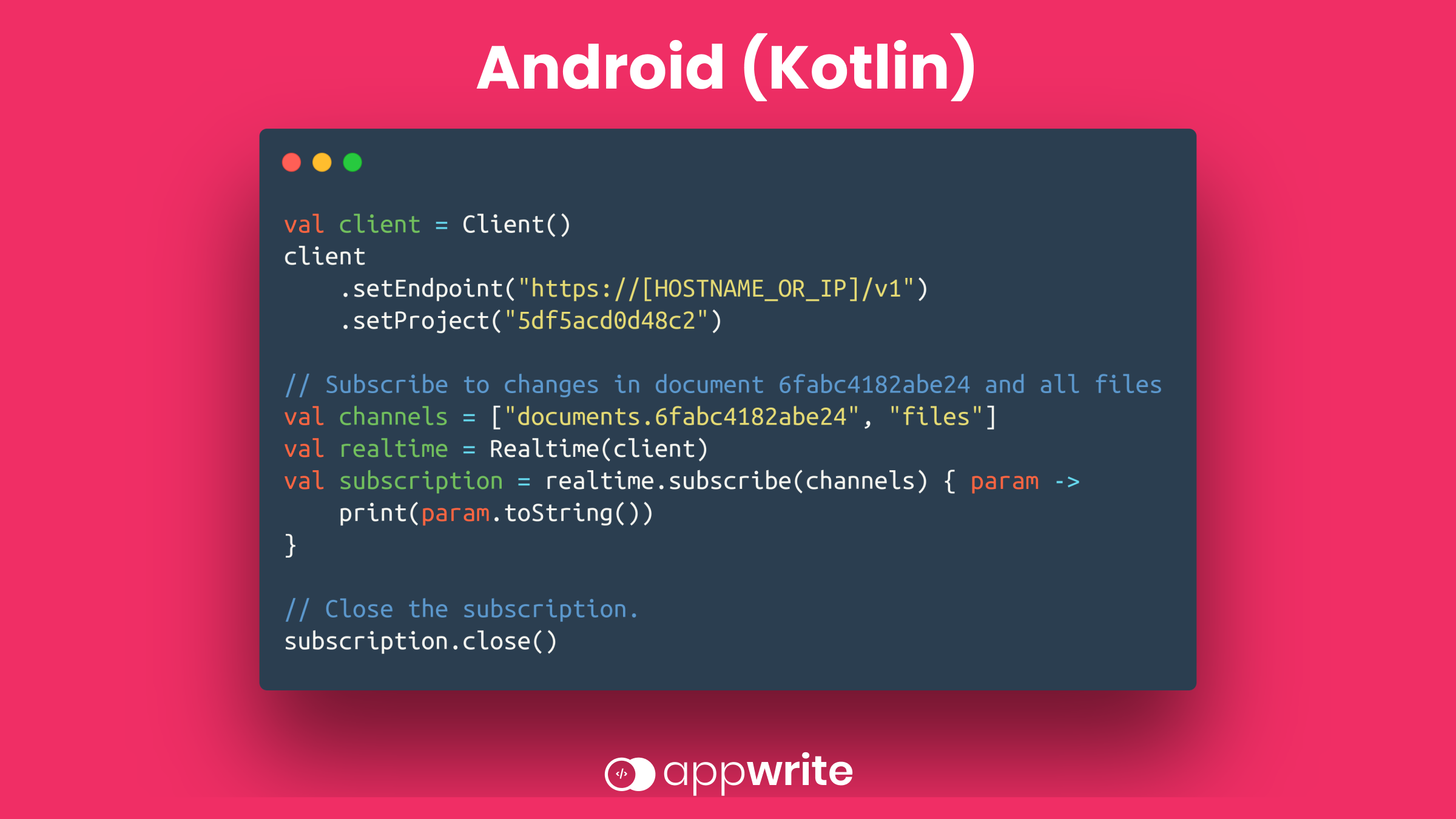 To learn more and start to integrate your apps with these neat real-time capabilities, read our updated getting started tutorials for Web, Flutter, and Android, or check our advanced documentation section for the Realtime API.

As part of our ongoing efforts to tune the Appwrite Cloud Functions service, version 0.10 will significantly boost the execution times. In addition, as part of a more extensive effort, we have migrated the Functions executions API to directly interact with Docker TCP API instead of the Docker CLI. This change resulted in 60-120ms performance improvement for most available runtimes! 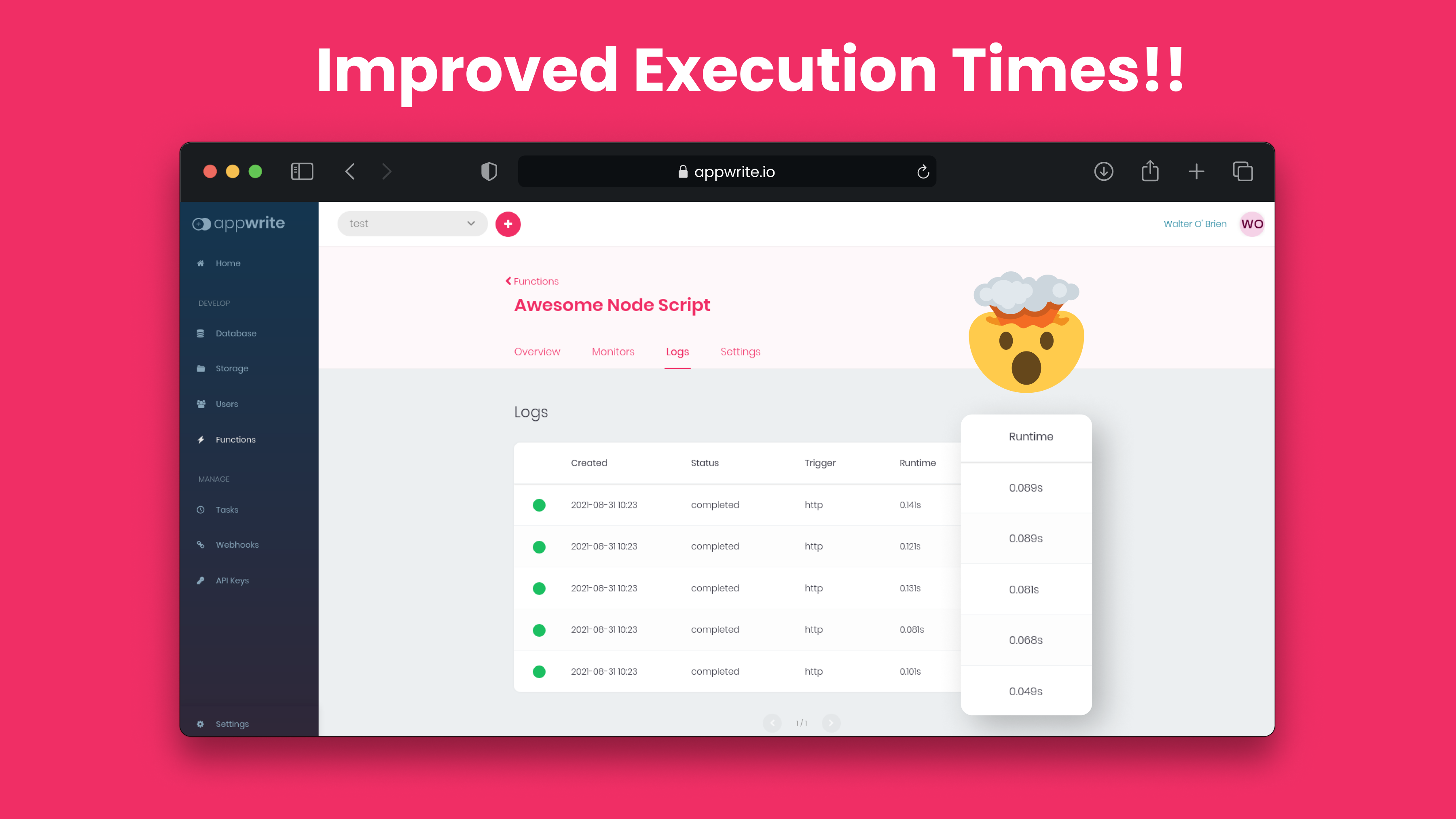 The next Appwrite version will include more upgrades as we plan to add support for both synchronous and asynchronous function executions and more performance improvements expected to boost execution times even more significantly. So stay tuned 😉

As requested by many members of the Appwrite community, we have now added three new API endpoints for updating your users' name, email address, and password using both the Users API and the Appwrite console! 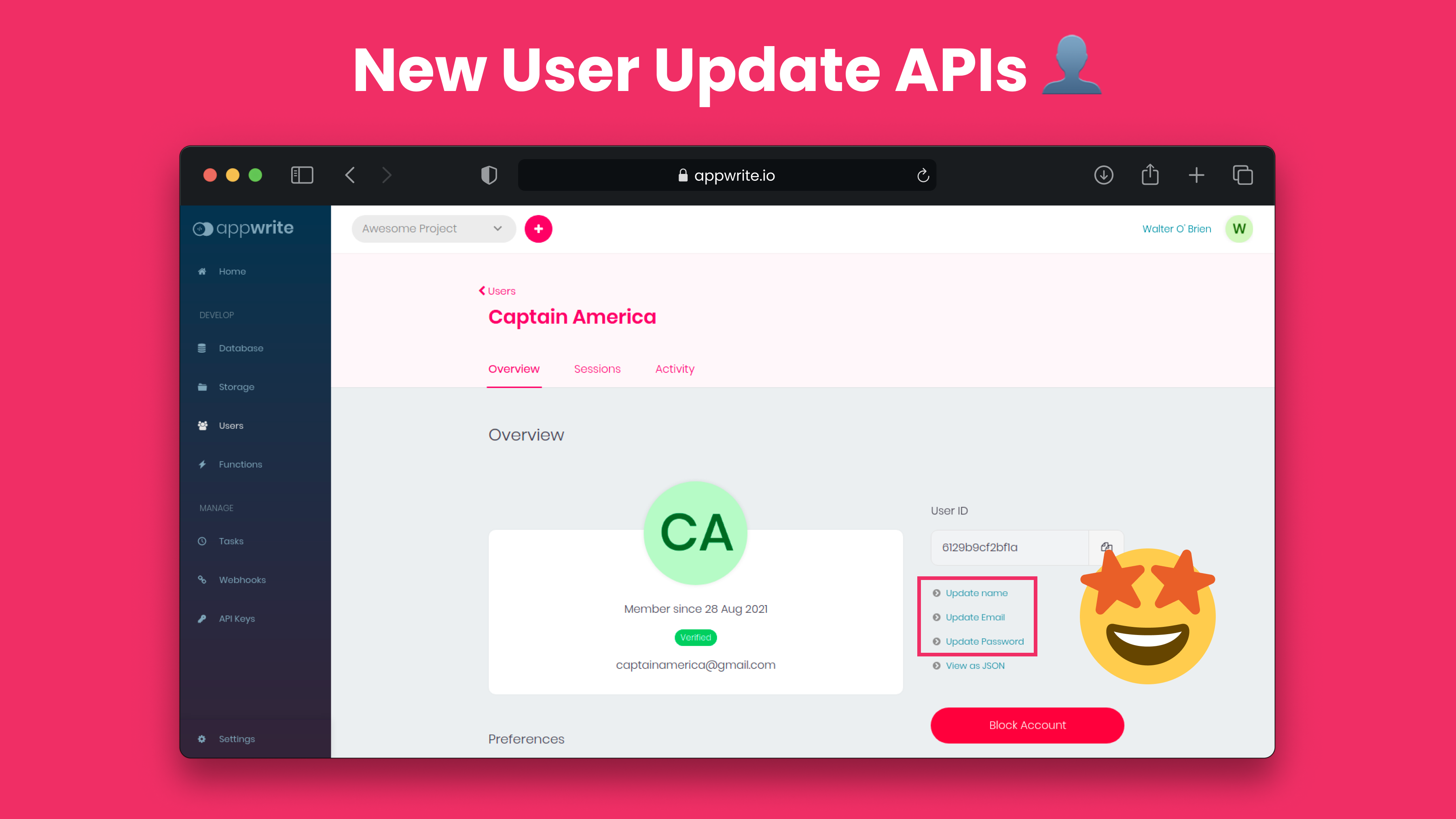 Using the new endpoints, developers of your projects get full freedom to manage your app users without the need to use the Accounts API or a JWT secret for handling this kind of behaviour from the Server API. 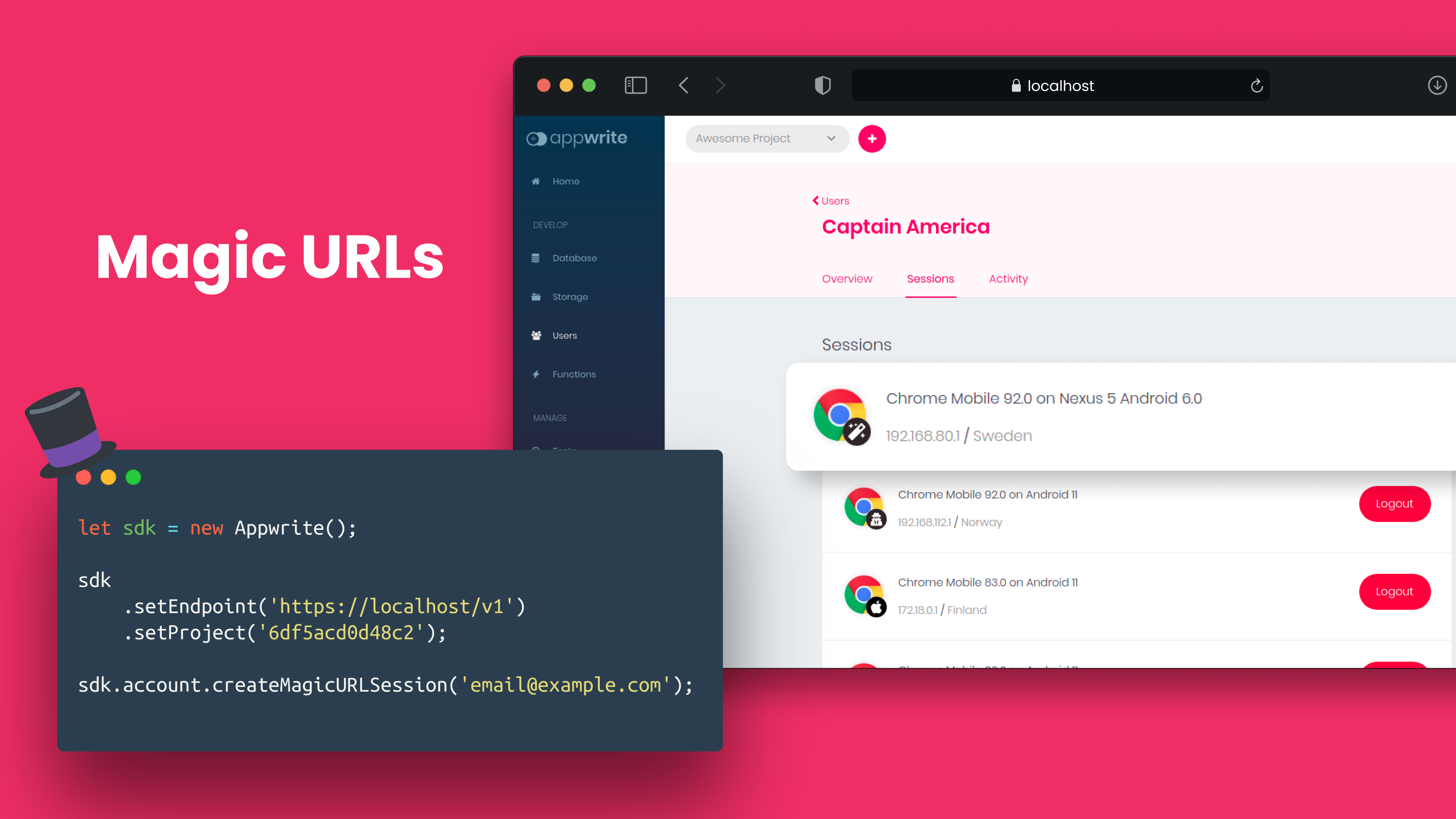 We still haven't covered everything! There's lots more bug fixes and other micro optimizations we made under the hood to make your experience with Appwrite better! To get all the details on Appwrite 0.10, check out all the changes in the changelog on GitHub.

Are you curious about the big ideas we have up next, or have a great idea for Appwrite's future? Check out the RFC Repository for more details. Also, our awesome-appwrite repository keeps growing with new tutorials, videos, and demos.

If you've just discovered Appwrite and would like to get started, check out out our 30 Days of Appwrite series where we explain step-by-step everything you need to know to build awesome Appwrite-powered apps. Follow us on Twitter, Dev.to, or anywhere you find your friendly neighbourhood Appwrite.

Appwrite 0.11 is not far away and we promise it's going to be even more exciting 🤩! We'll continue improving upon Appwrite's solid performance, flexibility and adding amazing new features.

Do you have ideas for an exciting new feature ? Open up a Github Discussion so you can get feedback from the core team, maintainers and our ever growing community.

You're welcomed to join us on Discord to get all the latest updates about new Appwrite versions and chat directly with the Appwrite team.